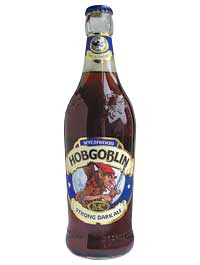 Black Wych is black in colour (surprise surprise) with ruby edging and a tan head. It has strong chocolate and caramel aromas, with dark malt and a touch of coffee. Despite the sweetness on the nose, it tastes incredibly dark and rich - just how I like it. It has a dark roasted malt flavour - maybe a little burnt, rich coffee flavours and a hint of dark chocolate. It has a bitter finish, and is a very smooth beer despite being a little on the fizzy side at the beginning of each mouthful.
So while I will not be dressing up this Halloween, making mischief or eating waaaay to many sweets, I will be celebrating the 'holiday' by drinking a few of these Halloween beers. And if you come across Wychwood brews in your local supermarket or liquor store, give them a try - they look good, and taste even better.
Happy Halloween!
Posted by Demise at 3:00 PM 2 comments:

It is no secret that chocolate is a big weakness for most girls, and can soften even the most stubborn of women.
Personally, I can get through almost a full block of Caramello during a 2-hour movie, and have been known to down several family bags of original MnMs over the space of a weekend.
But recently, I have found a far more fun way to get my regular cocoa dosage - chocolate beer. (For some reason because it is in liquid form I also think I'm being healthier than eating my old favourites, whether it actually is I doubt!)

I know what you're thinking - chocolate beer doesn't exist. But before I tried my first, the closest I thought you could get to a 'chocolate beer' was Renaissance Elemental Porter or Invercargill Pitch Black with their dark chocolate and coffee hints in a rich malt body. Oh how wrong I was.

The first chocolate beer I ever tried was about a year ago, from the English brewery Young's. My partner David and I had been avoiding trying it at The Malthouse for quite some time because double chocolate and stout sound, well, quite disgusting really. But because it was one of the few beers that we had not tried from The Malthouse's generous selection at that point, we gave it a crack. Half an hour later the bottle had been well and truly consumed and we were still sitting at the bar talking about it. In fact, I think everyone I spent more than five minutes with for the rest of that week heard, in detail, exactly how amazing it was. 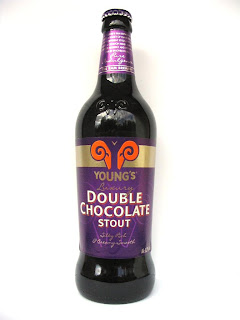 Young's Double Chocolate Stout 5.2% ABV
Since that fateful afternoon I have had many tastes of the brew, and am I always surprised how similar it is to the real thing. It pours pitch black with a fluffy light-brown head. It smells of milk chocolate, dark malt and dark fruit - maybe a bit of cherry. The flavour is surprisingly balanced for such a full-bodied beer! It tastes like milk chocolate all the way from start to finish, but has a cocoa and dark malt bitterness at the end of each mouthful - chocolatey, but not too sweet. Could definitely have more than one in an evening, and have known many a non-beer drinker to enjoy it as well.

Blenheim brewery Renaissance recently tried there hand at brewing a chocolate stout too - this time an oatmeal stout made with real Belgian cocoa nibs.

Renaissance Craftsman 4.9%
This too pours pitch black and has a thin tan head. It has dark, roasted malt and rich cocoa aromas and tastes very dark too - black malt and cocoa flavours, with a pleasant bitterness in each mouthful - like the cacao beans you can taste at Dunedin's Cadbury factory. The body is a little on the watery side, but this actually works very well to balance the rich and bitter flavours. What I like about this is you can taste the bitterness of the chocolate - any dark chocolate lover would adore this beer.

But the closest thing to chocolate I have been able to track down is from a brewery in Greenwhich called Meantime (cool huh?). New Wellington beer bar Hashigo Zake just got in a few of the Meantime drops, and among them is a beer simple called chocolate. 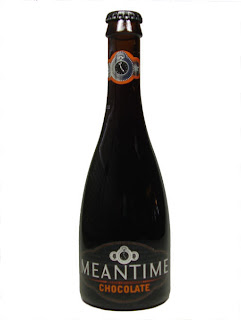 Meantime Chocolate 6.5% ABV
If I hadn't seen this poured directly from the bottle, I could swear someone was playing a mind games with me. It's dark brown with ruby edging and smells exactly like Cadbury's Dairy Milk chocolate. No kidding. It is incredibly rich in flavour - like I'm eating a block of milk chocolate. You even get a wee bit of furriness on the inside of your cheeks like when you suck on a cube of your favourite block. It has a touch of dark malt at the end of each mouthful and has quite a watery and fizzy finish which really work to cleanse your maouth and make you want to go back for more. You couldn't get any closer to liquid chocolate if you tried - it even hides any hint of its 6.5% ABV.


And the best thing about being a chocolate beer 'comfort food' convert is that you don't feel nearly as full after a bottle or two of it in a cooled, liquid form - leaving room for a bar or two of the real thing.
Posted by Demise at 12:18 AM 1 comment: