I love beer. I love discussing beer with anyone who has ever tried beer. I also love to see people drinking beer and, moreso, quality beer. What I don't like is being shoved every-which-way by loud drunks in a far-too-small marquee on a grey, rainy day. Which is what most of my experience at the Liquorland New Zealand Beer Festival entailed.

The venue was Waitangi Park in Wellington City and organisers had thoughtfully put up marquees to keep the impending rain off stallholders and beerlovers alike. However, what the event co-ordinators did not expect was well over 2000 Wellingtonians showing up to taste what was on offer while it constantly poured with rain. 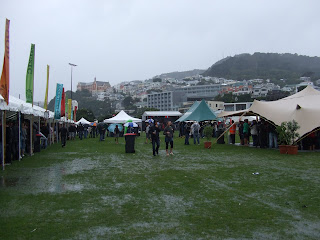 I arrived at the park not long after noon and, along with my boyfriend and brother, quickly claimed a place in one of two seating tents. As we took turns to do the rounds and sample the newer and older brews, the park began to fill up and the tent became awfully loud. Discussing the beers casually with the boys soon became a yelling match, and girls with high voices are not easily heard over the drunken laughter of male university students. We begrudgingly left our prized seats when the, shall we say intelluctually challenged, drunken under-grads, started to spill their Carlsbergs on us. 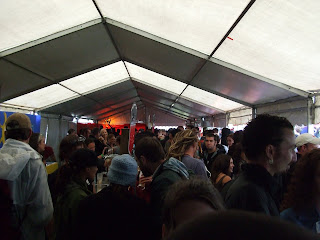 Soon after wading through the swamp that was once Waitangi Park, we took shelter from the rain between the Speight's and Tuatara stalls, and realized the squishing and the scrummaging in the standing area was not much better. We quickly ridded ourselves of our bright-green beer tokens and left, thinking five hours in such uncomfortable surroundings was a pretty reasonable effort.

Despite the less-than-ideal conditions in which the beer festival took place, there were a few very interesting beers available to try.

Invercargill Boysenbeery
A lambic-style wheat beer with incredibly strong flavours. It pours a cloudy, deep red with a pale pink head - it was quite amusing to see a large number of kiwi blokes walking around with such a girly-looking beverage in their glasses. Full of berry aromas with a hint of vanilla, and it does not disappoint with a bitter-sweet boysenberry flavour. Quite full in body for a fruit beer, due to the addition of wheat, and a beautiful sour-yet-sweet complexity which akes every mouthful a delight.

Croucher Belgian Beer
A 'mistake' by the brewers own admission, yet a very pleasant-tasting one at that. During the brewing of a Pilsner batch, the air-bourne wheat malts contaminated the brew creating a Belgian-like beer as a result. So Croucher decided to sell it as a special relase at the Liquorland Beer Festival and recieved a lot of positive feedback from the crowd.
It pours a slightly hazy golden with a white head and has subtle yeast, wheat and banana on the nose. The flavour is quite complex, with yeast and a strong taste of cloves. Banana, caramel and sweet malt all work to balance, and even complement, the initial yeast and herb flavours. A yeast-like film is left on the palate at the finish which is a bit disappointing after such complexity, but all-in-all a good beer which I hope to try at similar events in the future.

Baltika Porter
Baltika, a Russian export beer, is quite new to New Zealand and is soon to be widely available from liquor stores and supermarkets - or so I was told by the girls behind the stall. With 9 different beers, Baltika cover a wide-range of styles from golden lagers to strong malt liquors. The porter was the best of those I sampled at the festival, and what a quality porter it is.
It pours a dark brown with a large brown head and smells quite smokey with caramel, chocolate and some alcohol on the nose. It tastes quite clean, with caramel, dark chocolate and vanilla flavours most prominent, with a slight syrupy taste of alcohol. However, the roasted malt flavour at the end of each moutful balances this sweetness nicely, to leave a sweet malt flavour on the palate.

All of these brews are highly reccommended if you get a chance to try them, although I would suggest doing so in a much more comfortable location than a cramped, swampy park in the pouring rain.

"Intellectually Challenged" is probably a little charitable for some of those people. Spilling beer and trying to sit where there were no seats. What got me was that tent was a Marlboro sponsors tent, with nothing to say it was sponsored by a cigarette company except for those two Aeroflot Air Hostesses in the corner. Nice review sis!