Piracy has been headline news in the past few weeks as Somalian pirates continue to hijack a considerable number of vessels passing through the Gulf of Aden, also known as 'Pirate Alley'.

When the world is facing such economic instability, ransoms of several million US dollars have been paid to the Somalian pirates without so much as a blink of an eye in order to secure the safe release of crew members and (in the majority of recent cases) millions of dollars worth of oil. It is certainly not a bad days work for the pirates, who don't even need to threaten the lives of hostages before large sums of money have exchanged hands.

With this widespread media attention of late, a recent trip to Regional Wines & Spirits resulted in my bringing home a 10.5% Belgian beer named 'Piraat'. Unfortunately, the beer does not reflect in any way the dispicable behaviour of those pirates roaming the African seas. 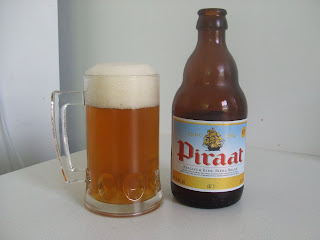 The beer embraces the pirate name by being a bold and daring drop, rich in both colour and flavour. It pours a beautiful amber-golden colour with a fluffy white head. Malt is the dominant flavour throughout, however, there is a strong sweetness to the beer thanks to the citrus and grape-like flavours which balance the bitterness well.

At 10.5%, there was undoubtedly a shocking alcoholic flavour at first. My best friend's only reaction to her her first (and last) taste was a very fitting "Arrrrgh!!!!" But after a few mouthfuls the strong alcohol is completely masked by the complex and smooth flavours of both the malty bitterness and fruity sweetness. One most definitely feels the strength of the beer by the end of the glass however.

As the pirates of the storybooks like to say, "Yo ho ho!"
Posted by Demise at 7:30 PM