It's all thanks to Fraser

The annual Regional Wines and Spirits Beer Options was held this evening at Wellington College's Firth Hall, where 14 teams competed for the coveted Gisborne Gold cup.

In a pub quiz-style competition, the Regional crew provided a total of 6 beautiful jugs of beer per team, accompanied by three multi-choice questions per brew.
The questions included:
"What is the alcohol content of this beer?",
"Where was this beer brewed?",
and "What is this beer?",
along with many a curve-ball, such as "What unusual style of fermentation is used to produce this beer?".

My boyfriend and I happened upon this competition purely by chance. We were told of the Beer Options only yesterday afternoon by Fraser, the head of Regional's beer section, when we went in to buy the new Emerson's Brewers Reserve.

We managed to talk two of our close friends into joining our team, and entered into the Beer options as the 'Garden Tools Gang'. We really did deserve the title of the worst name, but were ousted by the 'Novice Pints'.

We, the Garden Tools Gang, were both the last team to enter and the last team to arrive. After consuming some gorgeous beer, however, including Moa's St Joseph's Tripel and Belhaven's Scottish Wee Heavy, we managed a very surprising third place, closely following 'Seeing Pink Elephants' in second and the defending champions 'White Rhinos' in first.

What made our (almost) victory even sweeter, was that we were the second youngest team there, up against some veteran beer tasters, including one team who had competed in every Beer Options since it's inception.

Our acute beer-tasting skills won us 4 Crown Lager Umbrellas, 6 Christoffel Bier glasses, 6 500ml Epic Lagers and a voucher for Pizza at Bar Edward in Newtown. Expecting a near-bottom performance, it was a very surprising win and an incredibly enjoyable night indeed.

My excited boyfriend, David, is modelling some of our prizes below. 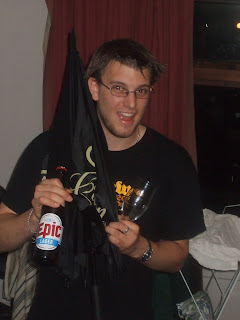 Who knew that loving beer could be so rewarding?
Posted by Demise at 2:11 AM