With Barack Obama's inauguration on January 20 2009, the US have entered a new era in politics. By association, so has the rest of the Western World. We are watching, very closely, with high expectations in the hope that Barack will bring something new to the world of politics, with positive and strong implications.

This week, I have chosen to discuss my favourite American Pale Ale, Emerson's APA, which shares many of the characteristics Barack Obama embodies. 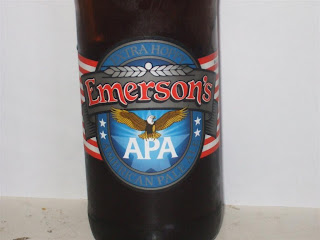 The American Pale Ale is a popular beer style, which is usually amber in colour, and hoppy, malty and fruity in aroma and flavour. 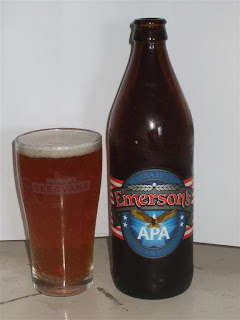 Although the bitter flavours are incredibly robust, there are some beautiful fruit characteristics such as citrus, pear and pineapple which come through just enough to sweeten the stronger hop and malt characters of the beer. The new US President does present himself as a strong, yet likeable leader, and this fruity sweetness of the Emersons APA creates a smooth, pleasant flavour.

Although the sweetness (which also includes a touch of caramel) of the APA complements the ale beautifully, it is the hoppy bitterness which lingers on the palate long after the last of the bottle has been consumed.

And while the US have entered a new era with the appointment of Barack Obama as US president, Emersons are leaving one behind with the September 2008 brew of their acclaimed APA to be their last. So if you can get your hands on a bottle (there are still a few floating around), do, and enjoy its robust, smooth and soothing qualties. As Obama and the APA style have proven, SOME American characters can have a lasting impression.
Posted by Demise at 7:12 PM

Just tuned into your blog...love it! i've had a few of the APA's and found them to be a bit of a mixed bunch, some with a lovely juice malt/hop flavour but some with a strange almost tobacco like astringency to them....not sure if you'd noticed that too?

Thanks Kempicus! I do agree, I think the APA style is quite a difficult one to do well. These beers can often turn out too one-dimensional, with the bitterness too overpowering for the other flavours to come through, which then leaves an unfortunate tobacco-y taste on the palate.