And so it is Waitangi weekend. Tensions are high in NZ Politics as John Key is "manhandled by protesters" at Waitangi. The Kiwi public are just as restless, but only beacuse a long weekend of gorgeous weather, the NZ Rugby Sevens and a lot of beer drinking lies ahead. And what better way to celebrate our country, our people, and our sporting teams, than by drinking New Zealand beer. Why not even take it a step further and drink beer not only made in New Zealand, but brews which make a point of declaring themselves as a New Zealand beer through and through.

Finding this kind of beer is harder than you may think. We have our local beers which celebrate our regions (Waikato Draught, Canterbury Draught, Speights), and those made by New Zealand companies, but celebrate an international style (any Pale Ale, Pilsner, Bitter or Strong Ale). So I have selected three beers which assert themselves as New Zealand beers in both their style and labelling: Monteith's New Zealand Lager, Matsons Silver Fern, and Wigram Brewing Company's Spruce Beer.

Monteith's New Zealand Lager pours a dark golden with thin white head. It has quite a malty nose, with subtle citrus aromas coming through and a touch of yeast. From the first taste, you know this beer is going to be a great companion for the long weekend. Malt and citrus flavours, particularly orange, immediately burst through, with a beautiful hoppy kick on the finish. It's clean and smooth, with a lot of flavour and a sweet malty aftertaste. 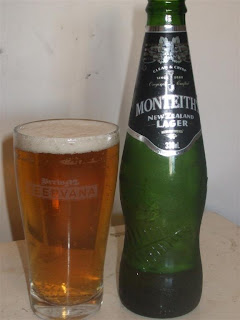 Although the beer doesn't smell like anything special, Monteith's New Zealand Lager has a lot of flavour and is incredibly drinkable, especially when sitting in the summer sun. Plus, the bottles have fern shapes moulded in the glass - perfect for our Waitangi celebrations.

Matsons Silver Fern pours, in contrast, quite a pale golden with a fluffy white head, which quickly dissolves. The aroma consists of a honey-like sweetness with a grassy hop character - evocative of our agricultural roots. The flavour is quite sweet, with smooth honey notes coming through, but the floral hops add bitterness to balance this out.

A touch on the sweet side, though this makes Silver Fern an incredibly drinkable lager, with a bit of a grassy flavour left on the palate. A bit harder to find in the North Island, but widely available in the South (you lucky things), well worth a try if you get the chance this Waitangi weekend.

And, if you're after something a little more adveturous, try Wigram Brewing Co.'s Spruce Beer. The label describes it as being 'based on Captain Cook's orginal recipe as first made in Dusky Sound, New Zealand, 1773.' It is flavoured with two of New Zealand's native resources: 'spruce'(rimu) and tea tree (manuka). For those beer drinkers really wanting to be patriotic this Waitangi weekend, this is the one to try. 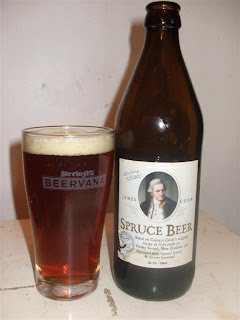 Wigram's Spruce Beer pours an amber colour with a decent tan head. It smells quite musty, with manuka shoots and herb very dominant on the nose, almost as if you're walking through the New Zealand bush in the rain. Definitely not unpleasant, but not what you'd expect from beer! The flavour is a lot cleaner, however, with the manuka coming through nicely, complemented by a malt base, subtle herb flavours and a vanilla-like sweetness - too light to be honey or caramel. It does also seem to have quite a woody character to it near the finish though, and a strange yeast and vegetable finish which is not the most pleasant on the palate.

I must say, I have not tried another beer like it. Despite it's unusual qualities, the earthy characters seem to work and you are left wanting more. And more.

This Waitangi weekend take your beer drinking and New Zealand-ness a step further by enjoying one (or more) of these purely 'Kiwi' beers while watching a great day on the field for our Sevens boys, a second Black Caps victory in Melbourne, or just sitting around the barbie wandering if more "manhandling" is going down at Waitangi.

Those guys should have beaten John Key with bottles of Spruce Beer instead of 'manhandling' him. That would have been ironic. Pity we can't get an outstanding beer to represent NZ though.

I believe in traditional styles and brewing techniques, and when NZ replicates these, it always turns out pretty good.
I can see what you mean, though, Denise. NZ needs more beer of its own. Pity the best come from the unknown parts and are quickly tossed aside!
I'm yet to try any of the brews you've described in this post - but your descriptions are thoughtful, personal and simply effective - I'm heading out with these in mind!
Love Hank.