Something a little Irish...

It was March 17th yesterday, which is also known by the Irish, Catholics and stout-lovers as St Patrick's Day. We Kiwi's celebrate our Irish heritage (or lack thereof) by spending the day dressed in green, humming to Irish tunes and downing as many pints of Guinness as, well, the Irish.

But with 2009 marking 250 years of Guinness, I think the whole St Patrick's Day tradition of drinking the Irish stout is getting a little... boring. And as the Irish are known for their weird and wacky (ok, mainly drunken) ways, I wanted to find a different way to mark the occasion. And so with a little searching and experimentation, I did.

Guinness Special Export (8%ABV)
Brewed for the Belgian beer market, Guinness Special export is available in bottles from specialty liquor stores in New Zealand and is well worth tracking down. It pours pitch black with a light brown head, but does not have that creamy "Irish" head as there is no widget in the bottle. 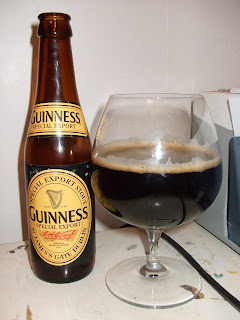 Nevertheless, this beer is quite an exceptional stout. With coffee, malt, caramel, dark chocolate and a hint of alcohol on the nose, there is no doubt you are in for a treat. The Roasted malt and coffee flavours hit the taste buds immediately, moving though to the sweeter characters of caramel, dark chocolate and an almost syrupy alcohol taste. The finish is quite bitter in contrast to this sweetness, with burnt malt and a smokey flavour giving the beer a real kick to end he mouthful. Unfortunately, the aftertaste is, well, unpleasant, with the mix of alcohol and bitter malt leaving a syrupy-burnt flavour lingering for quite some time. A very good beer despite the finish however, and very different from the original Guinness stout.

Guinness Draught (4.2%) and Lindemans Framboise (2.5%)
In a bit of a twist on the stout and raspberry trick, I thought the traditional Guinness could benefit from the addition of a splash of raspberry fruit beer.

Guinness, in its pure form, is a little watery despite a creamy, nitrogen-filled head. (The addition of nitrogen means the beer produces smaller bubbles, which results in a smooth, creamy texture. Mmmm...) The aroma and flavour both consist of solid coffee and roast malt characters, and the beer also has a subtle biscuity character which adds both body and a sweeter element to each mouthful. Guinness is, however, just a classic stout with no frills.

Lambics are known for their sweet, fruity characteristics, and Lindemans' range of fruit beers tend to be on the sweeter side of the scale. Almost everyone has heard of adding raspberry cordial to a bitter or lightly-flavoured stout to add a sweeter element to the brew. So I decided to push this boundary a little in the spirit of St Patrick's Day and add Lindeman'd Framboise to Guinness. 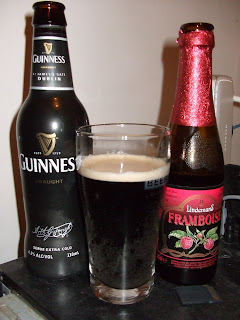 By only adding approximately 30mls of the lambic to 300mls of Guinness, the impact was quite startling. The beer's aroma was transformed into a field of raspberries with a subtle malt character. The raspberry notes worked beautifully with the Guinness flavours too, with the berry sweetness combining with the coffee and malt flavours to create a more full-bodied, yet smooth, texture and balanced sweet and sour notes. Although I feel this experiment would have worked even better if the amount of framboise was almost halved, the addition of the Lindemans lambic made the Guinness a more complex and flavourful beer which could be enjoyed by stout lovers and haters alike. Well worth a try.

Green Man Stout (7%)
Finally, for those who have been around for almost as long as the Guinness brew itself and need a change, Dunedin's Green Man Stout is the way to go. Not only is this stout better in flavour, but with a name like 'Green Man' it's almost like you are drinking an Irish beer. Almost.

This beer pours an opaque dark brown with a light brown head. The aroma is quite malty with coffee notes, dark chocolate and a hint of plum. The flavour is surprisingly crisp, with incredible complexity - dark chocolate, raisin, plum, prune, a strong cherry character and a bitter coffee finish are all present with every sip. The only hint of the 7% ABV comes in the aftertaste, accompany a lovely dark fruit flavour. This is far more complex than either if the Guinness brews discussed here, yet clearly adheres to the stout style. Sometimes we Kiwi's can beat the Irish at their own game.

Although the official St Patrick's Day celebrations have come to an end, why not do as the Irish do and get a bit tiddly for the rest of the week trying these Irish-inspired concotions. Besides, it's Guinness's 250th anniversary for the whole year - who needs St Patricks' Day as an excuse?
Posted by Demise at 2:42 AM

I had Ridgeway Foreign Export Stout. It was pretty god, reminding me of Green Man's version actually.

Good work on the blending. I've been doing it for years, it teaches your senses so much.

As for St Patrick's Day - although I went to a school of the same name, I'm pretty sure they should rename it Guiness Day and move the real Irish celebration to James Joyce's birthday. The Scots celebrate Burns Day, so why shouldn't the
Irish celebrate their great writer too.

Love the blog Demise. Keep up the good work. Check out CrouchingGiraffe.Blogspot.Com for more ber thoughts from a local female beer drinker.